Blog and Vlog are related to each other. Blogging is creating of a blog (web log) while vlogging is having a video blog.

Generally, Vlog may be possible by the use of many tools but blogging can be only through websites such as wordpress, blogger etc. The difference between blog and vlogs has been clearly defined in terms of video-posting contents. 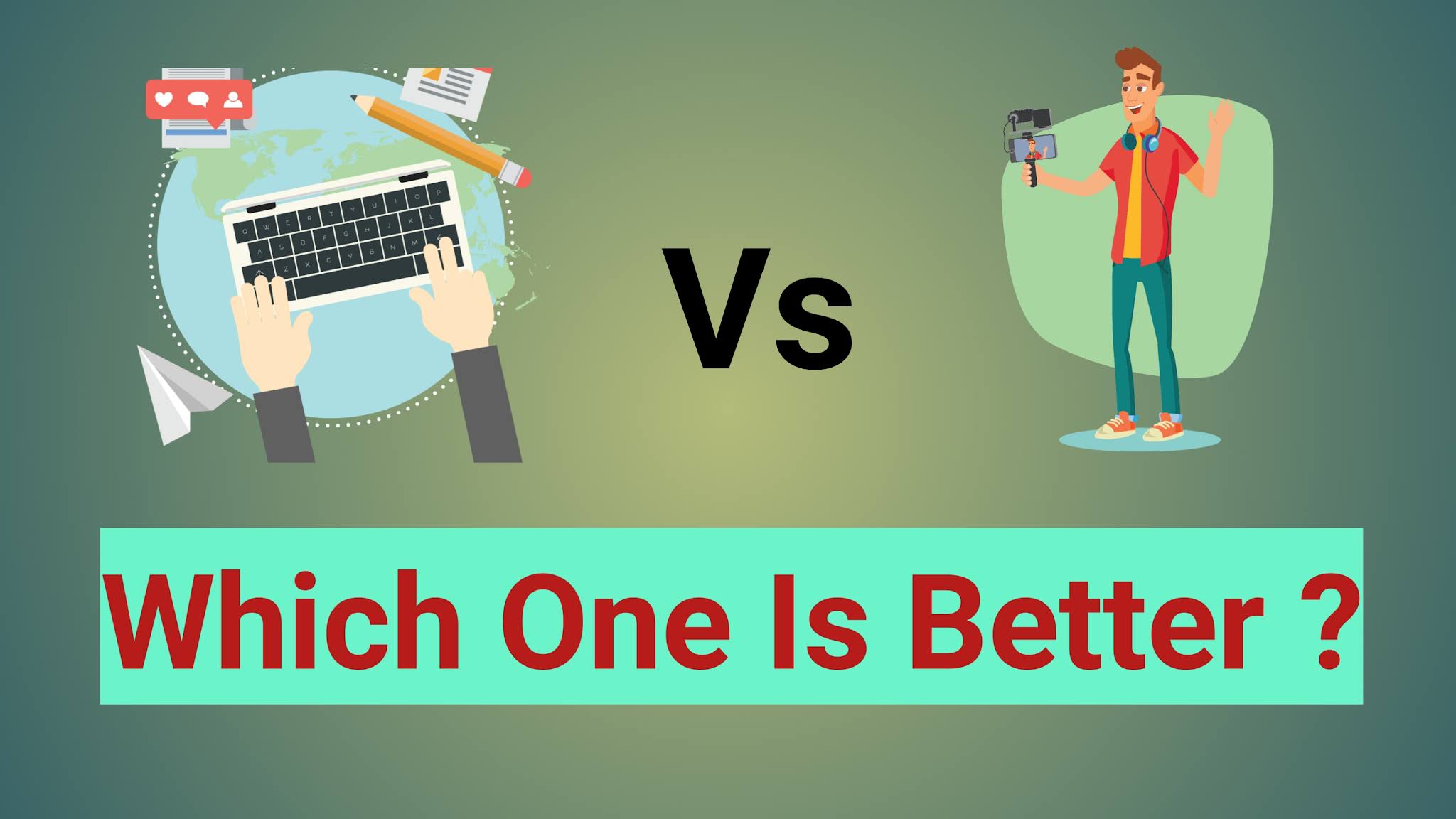 In blogging you make your website or blog and keep posting the content on it whereas in vlogging there is no need for making your own site or page because the videos that are produced will have separate pages just like youtube , dailymotion etc along with promoting your Youtube channel and even getting paid for it .

People who want to earn money producing good quality videos will be very much interested in vlogging.

Through this form of earning money you can also get great feedback about your skills and how well appreciated are you by people who view your content.

Here, we are talking about the difference between the two terms which is “blogging vs vlogging” and what they both have in common.

Also, along with that one can learn the benefits each of these holds for its users and how to start out on career as blogger/vlogger or even earn money through blogging or vlogging if one seeks it .

And of course there are various tools available catering to all these aspects. To start out a blog or a YouTube channel some basic knowledge on HTML programming is needed but once you’ve got that down you’re on your way to earning money.

Having the basic knowledge of HTML, making a site or a channel, and posting videos are some important steps in blogging or vlogging.

What is a Vlog?

Vlog: A video blog or Vlog (Voice-Log) is a type of blog which consists of mostly any form of videos.

Also Read:  Is Blogging Dead (What Has Replaced Blogging)

This kind of posting has specially been made popular by YouTube creators who create channels for themselves … and update their subscribers or viewers about their daily happenings, thoughts, feelings through the form of videos.

In fact these days people are most fascinated with watching vlogs than reading blogs because only with much shorter time they can get whatever information they want while reading long posts.

vlogs you can convey your thoughts to people and make them know that what is it like at your end.

The video files cannot be uploaded directly into blog pages because they have been made for YouTube or Dailymotion etc.

In order to avoid this problem various tools have been developed by blogging platforms such as blogger, WordPress etc .

These all provide the facility of hosting videos in blogger’s page so that no other website is needed in order to post videos from your site/blog.

The audiences you get in return will be influenced by your interests and what kind of videos you produce for them to watch.

The audience can also give feedback about the kind of content they want from you which may also help you improve as a blogger/vlogger , however this is dependent upon the number of viewers who send their comments.

One can make money through blogging or vlogging but there is not any specified “how much” of money makes one rich enough because it depends upon many factors like how well known are you as a mascot in the blogger field , what kind of content has been created by you which attracts viewers, etc.

But earning some amount of income from blogging and vlogging is possible for anyone who is persistent with their work.

Do you know I’ve made a simple math to get an approximate idea about earning money through blogging and vlogging. You’ll be surprised to see how much these professions can bring huge financial benefits.

If a person gets an average of $40 for every 1000 views that he/she has, then approximately if someone posts 10 videos they will gain around $400 per month (if all the viewers are from U.S.).

Wow! That is really something!! Just imagine the money one can earn just by posting some good quality video content on YouTube or any other social networking sites .

It’s obvious that by starting out as a blogger or vlogger one cannot make millions overnight; it takes time but if they work hard enough then success will surely come along their way.

That’s a fact! You just need to put your mind in it, believe me I’ve done it. So my dear friend why wait any longer? Just go and make some money out of blogging/vlogging, get rich and famous because your fans are waiting for you.

The Comparison Between Blogging Vs Vlogging

1- Both blog and vlog require only a few minutes to set up. You just need to choose a domain name and begin writing or recording videos .

But while blogging registration of the blog is very important .

2- While blogging, the blogger will directly or indirectly share his ideas with others but in video making he just talks about anything which is related to him or a product that he wants to promote.

In vlogging there’s no creativity involved so it can be boring for anyone who likes creative process because creating content on your own isn’t that easy rather than getting some professional help from some site .

Also Read:  How To Earn Money From Blog With Little Traffic

3- The major benefit of vlogging over blogging is about sharing videos on social networking sites.

Blogs are used widely by people throughout the world and most social networks allow you to share videos too.

But when it comes to restricting such activity some social sites like Facebook doesn’t allow users to upload videos so for that you have to use other sites like blogspot.com or medium.com .

4- Blogging is easy as compared to video blogging .

You can use a simple program such as word or Google docs and your blogging will appear on the internet straight away, which means it won’t take much time, but if you want to make vlogs then you have to watch tutorials and then record yourself making an interesting video .

5- When it comes to monetization, most bloggers make money directly through advertisements while some of them place content behind paywalls .

But when it comes to video blogging, there’s no need of advertisements or paywalls because viewers will watch it if they like the topic so you can directly get paid by the viewer as per his/her mood .

6- Some people say that vlogging is a marketing strategy while blogging is an art form.

This may not be true in all cases but generally speaking, blogging is a slower process which requires more attention and hard work .

It has been proven that vlogging can be very effective method to market your product online than just writing articles on blog , but then again, everything depends on how much effort you put into it every time and finding ways to make better videos with good content .

Also Read:  How Often Should I Update My Blog

7- Each blogger gets a blogspot domain for free while you’ll have to buy a vlogging camera or any other equipment, so this is an extra cost that will vary depending on your needs .

8- And the last and biggest difference between blogging and vlogging is , as I’ve already mentioned in point no.1, Blogger works like a website where different people from around the world post their content but there’s no fixed structure of it so anyone can join at any time irrespective of his location.

This makes blogging more interactive than video blogging or vlogging where everything is limited only by what is presented in the videos .

The difference between blogging vs vlogging is not vast; both require passion and interest towards particular topics so that it remains interesting for viewers while posting quality video or text contents is required to have a good amount of followers.

But there’s one thing for sure: Vlogging vs Blogging is not something which can be tackled only as a part-time venture. One needs to put efforts in regularly so that the career will continue bringing good results.

Also, though there are several tools which can help you out in any of these careers, one must have effective knowledge about the blogger or vlogging field.

You are no one without the skills you possess; no skills, no passion and interest, then there’s nothing to talk about.

Anyways if you have a think tank running already in your head then start out .

Just make sure you have a goal set for yourself and work towards it step by step.

So here I’m ending my article about some major differences between blog and vlog because after reading all these points one question comes into mind that is which one to choose .

But it totally depends on your choice and interest because if you just wanna make videos then you can directly go for vlogging rather than making a blog .